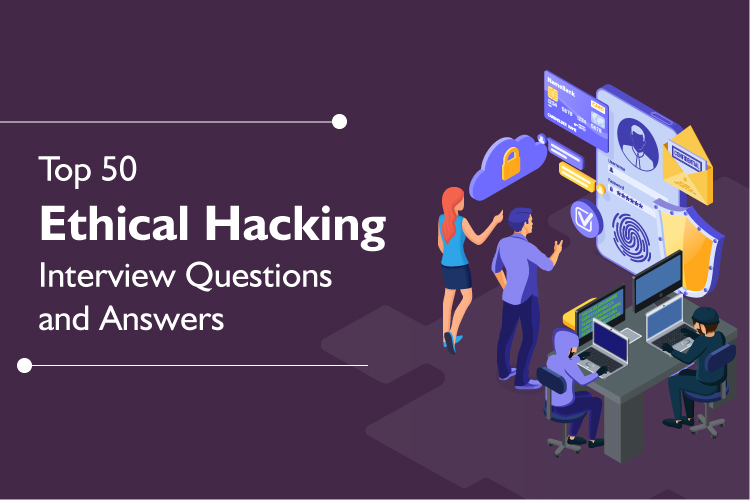 Ethical Hacking is considered to be Legal. So it means, Intruding into the target system WITH THE PERMISSION OF USER. Ethical Hackers work on the hacked machine and repair the hacked features and deliver back the normally working machine to their clients.

This blog is a Catalogue on Ethical Hacking Interview Questions and answers. This will definitely help both Freshers as well as Experienced Professional Hackers to refresh their Hacking Knowledge.

Ethical Hacking is the process of accessing a targeted computer network with the permission of its respective owner with the intent to solve and furnish the hacked issues. They do not damage the client’s computer system and their intent is the straight opposite of Hackers. Ethical Hackers continue their business with ethics.

The 3 different types of Hackers are categorized based on their working attitude. They are,

3. Tell us which type of Hacking is considered legal.

White Hat Hackers are legally permitted inside the working environment.

Because they intend to save the hacked computer system and protect its information. Usually, they know where is the hacking entry point and usually block it and make the system safe. In terms of the Internet, White Hat is considered to be professionally safe.

Hacking is an art of exploitation usually done to cause damage to physical systems, money and bring human stress.

Computer machine in its every form is hacked as,

The above are the frequently used tools by Ethical Hackers.

Foot Printing is Researching well before starting to Hack. Footprinting is a detailed process of gathering information about the target system before gaining access to a hack. Later upon hacking completion, the hackers must erase and hide all the hacked tracks and uncover them from targeted system owners.

7. Explain the techniques in FootPrinting in detail.

Different techniques used in FootPrinting are explained below,

8. Explain in detail about the CIA Triangle.

SNMP protocol stands for Simple Network Management Protocol. It is used for simple Transmission, to monitor remotely (virtual monitoring), and managing and maintaining the hosts, routers, and other network devices.

10. Tell us about Network Enumeration.

MIB is the abbreviation of Management Information Base. MIB has all accurate information and knowledge about Network objects and it is structured as a Hierarchical Virtual Database. It is applied in SNMP and Remote MONitoring 1 (RMON1).

A sniffing attack is a malicious attack used by Hackers that is similar to accepting a phone call and hearing the ongoing conversation as a third party without the knowledge of actual callers. Technically, Sniffers block and capture the data packets in ongoing network traffic. They do this theft activity to capture secret information and necessary data.

Actually Sniffing is conducted by Sniffers by using a Sniffing Tool.

There are various sniffing tools used by the Sniffers. Out of them, the commonly used ones are

14. Tell us about the advantages of Ethical Hacking.

The superlative Merits of Ethical Hacking are:

15. Explain the disadvantages of Ethical Hackers?

Some main disadvantages in the Ethical Hacking domain are that,

DOS attack is termed as Denial of Service attack. It’s a process to shut down a machine or a network to make sure that no user can access it. DOS attack is powered by User over consumption of resources that result in flooding servers, systems, and network traffic.

18. Explain the stages in Hacking?

The different stages in Hacking are listed below as per order.

19. Tell us about CoWPAtty

CoWPAtty is a software that is built-in C Programming by Joshua Wright. It provides hackers, attackers, and network administrators a way to develop offline dictionary-based attacks against wireless systems like Wi-Fi, Bluetooth. It enables its users to break wireless WPA and WPA2 systems by taking primacy over authentication based on the PSK (PreShared Key) model.

20. Tell us what you know about IP addresses and MAC addresses.

IP Address is abbreviated as Internet Protocol Address. The IP address is actually an allocation address to every device on your network.

MAC stands for Media Access Control Address. A MAC address has a unique serial number assigned to every network interface on every device.

21. What is SQL Injection

We know SQL is a common database. But in the Hacking world, they use SQL Injection as a technique to steal information from organizations. Actually, hackers brought SQL queries into use by finding a fault in the application code.

SQL injection is actually carried out when hackers inject/insert any malicious content into a normal and official SQL query string. SQL Injection is done by hackers with the intent to destroy the complete database of an organization.

A Trojan horse or Trojan is a type of malware developed by hackers and used to gain access to login into the target system of the user.

After criminally logged in to the target system, the Trojan horse starts to damage the Routers and other networking devices. Hackers now use it as a chance to re-direct traffic on wifi connected devices and log in to commit CyberCrimes.

Online based Social Engineering attacks are Phishing. Actually, Phishing concentrates to start cybercrime through Mail. Hence, the Phishing technique involves sending fake e-mails and chats to imitate the actual system(without the knowledge of the real system) with an intent to steal Official/Personal information from the original identity or person.

Some types of malicious Trojan are,

From the above, hope you have got an idea about important and basic concepts on Ethical Hacking.

Now, let’s proceed to some brainstorming questions for tenured professionals.

25. What are the different types of SQL injection?

The 3 types of SQL Injection are depicted below,

The varied forms of Social Engineering attacks that in-directly causes threats to society are,

Penetration testing in ethical hacking is the practice to test any computer system, network, or web application to find if it has undergone security breaches that an attacker has intruded on.

Penetration testing nowadays could be automated with software applications or sometimes performed manually itself.

Some types of Penetration Testing are explained below,

Spoofing is a benevolent act that is done by hackers to steal our personal information and money. The spoofing process is initiated by sending a verbal/voice communication from a strange/unauthorized source that is personated as a trusted source. If our common users just attend or click the respective voice and verbal communication, it paves way for the hackers to access their information automatically without the concerned person’s knowledge. So we should be cautious from malicious sources even in mail or call.

CSRF is Cross-Site Request Forgery. CSRF attack becomes successful when the attacker successfully urges the victim user to act on them unintentionally. For example, the CSRF attack includes requests to change the email address for their account, to change their user ID and password, or to transfer monetary funds.

To control and stop CSRF Ethical Hackers can attach an uncertain Challenge token to each request and couple them with the user’s forum. So, the developer makes sure that the request received is from a valid and original source. So CSRF is actually identified through a Challenge token.

But anyone has to be careful about unknown calls and responses.

31. Tell us about Fingerprinting in Ethical Hacking.

Fingerprinting identifies which Operating System(OS) is running on a remote computer. Fingerprinting is also known as Footprinting. It is the art of using the information to co-ordinate data sets to recognize network services, operating system ID and its version, software applications, and databases.

The two kinds of Fingerprinting are described below,

The different kinds of Enumerations in ethical hacking are:

33. Tell us about Enumeration.

Enumeration is the method of extracting machine names, user identity through names and user IDs, network resources, shared services from a system.

The Enumeration techniques are conducted under the Intranet Environment.

NTP is Network Time Protocol. Its primary use is to synchronize clocks in Networked computers. Port 123 is used for primary communication. Time is maintained up to 10 milliseconds over the Public Internet.

35. What do you think about the best programming languages for Hacking?

Some popularly used programming languages for hacking are our commonly used coding languages.

Some persons will have a below-average range even in basics of computer programming knowledge but could be very innovative in the usage of simple software. They use this software application knowledge to attack a computer. Those techies are identified as Script Kiddie.

VIRUS is defined as a piece of code that has the ability to copy and multiply itself which leads to disastrous effects, such as corrupting the entire physical system or causing threats to data. Actually, VIRUS is Vital Information Resource Under Siege.

Some software is dedicatedly designed as an application to use for Hacking.

Those kind of programs available currently are,

PGP is Pretty Good Privacy. PGP is a standard encryption system used for both sending encrypted emails and to encrypt sensitive files. It was invented in 1991 by developing in C Programming language. To protect email security, PGP was developed.

The Human Readable Content is converted into unreadable symbolic junk values that humans couldn’t read and understand. This process of conversion is called Encryption.

This variety of Trojan finds the emails that are stored anywhere, in any luke and corner in your computer even through the keyloggers. They steal the mail information to sell those email ids outside to digital marketers or spammers.

A brute force attack is commonly used at the very first attempt by all to start the hacking process. Guessing the username or password by trying with all possible combinations of alphabets, numbers, and special characters are called a Brute Force Attack.

A Bot is a script or software created mainly to attack the network faster and damage it to the core.

A Bot is a program that automates a repetitive action performed at a much higher rate for several periods of time more than a human operator could do it.

A Botnet is a network of Bots. It is also termed as a zombie army, where a group of computers is controlled without their respective owners’ knowledge. Botnets are made to work by sending spam emails or to make denial of service attacks.

Some various kinds of Spoofing are,

47. Mention the Top 5 Cybercrimes that you know.

The topped cybercrimes are ordered below,

48. Can a satellite be hacked?

Of course, Yes. Modern Tech Brains paves the way to hack any network. Even hacking Satellites are a simpler task for hackers nowadays. As we know, Satellites are controlled from Ground stations. If this ground station computer network is hacked, then the entire satellite network will come under the Hacker’s control. Then, they start sending malicious commands to satellites that become a big safety threat to the whole nation.

49. Which programming language you think is the best fit for hacking?

50. Which country has the pool of Hackers?

The Republic of China has the hub of Hackers. China is the Homeplace to the largest number of hackers on Earth. The majority of its Youth have Cyber Literacy because China promoted Cyber Security as its culture. This led to the birth of many cybercriminals too. As per several estimates, nearly 45% of the global cyber attacks have their source root in China.