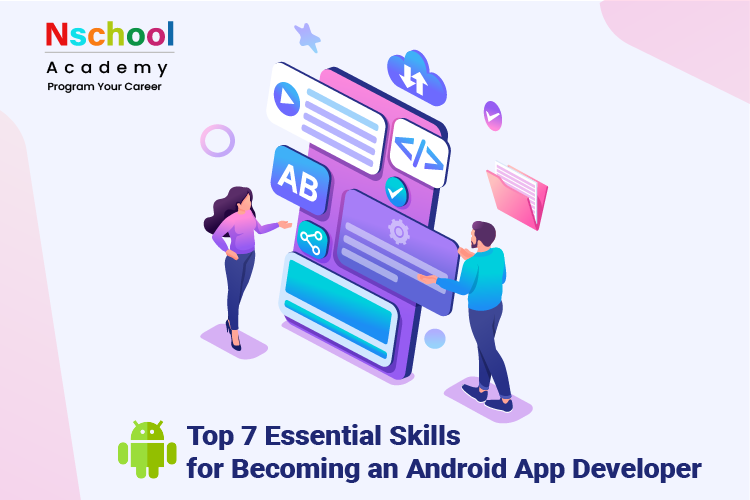 Android now comes out on top on a worldwide scale today. Android users are nearly 75% of the world’s population. It is an operating system with a large app market, and the Google Play Store has a whopping 2.87 million apps. The need for Android developers is in boom with high pay. Developing Android applications necessitates a comprehensive understanding of programming and design. Many of the technologies and concepts involved in developing an Android app will be familiar to experienced web developers. However, creating apps for mobile impact in various necessitates mastery of several more progressive ideas. Because mobile devices have smaller screens, more straightforward producers, and multiple manufacturers (in the case of Android), developers must keep code flexible and account for various graphical user occurrences.

These are the top skills required by developers to develop Android apps:

Every Android application developer should be familiar with languages such as Java, Kotlin, XML, and Firebase. Developers who use this expertise to develop a successful Android Mobile Application. Let’s have a deep dive into the programming languages used in android development.

Java is an Object-Oriented language known for its platform-independent feature, i.e., you can write the code once and execute it anywhere. This made Java successful over the years and the best choice for android development. The code is written in the form of classes and objects, enabling developers to reuse the code in various applications. Java is a vital skill required to hire android developers. A strong knowledge of Java helps you code complex modules in developing an android application.

Kotlin is a buzzword of late. It overtook Java at some phases due to its fantabulous features. Kotlin achieves the objective of android development in fewer lines compared to Java. The code written in Kotlin is user-friendly with clear syntax. Kotlin was structured to solve the bugs in android development when other languages couldn’t solve them. Due to its mature environment, it acts as the best fit for developing enterprise applications. Kotlin also helps you interpret building apps with Java and enables you to build applications for multiple platforms.

eXtensible Markup Language is a markup language similar to HTML that renders a description of data. The tags used in XML are user-defined. XML is majorly used to store, organize, and define data. Due to its flexibility and extensibility, XML is used to design the layouts of android applications. Contrary to HTML, XML is case-sensitive, and the requirement of closing tags is must.XML also preserves whitespaces.XML plays the role as the layout foundation of android mobile applications. So, it is necessary to have in-depth knowledge of XML for android app development.

Firebase is an application development software by Google used for its analytical, app integration, and marketing features. Firebase plays a vital role in developing a high-quality android application that helps your business to grow and turn over a considerable number of profits.

Today majority of apps are accessed on mobile phones. Therefore there is a huge demand in need of applications that are responsive. As the first impression plays a crucial role in retaining the users and generating revenue for your business, make sure you understand and design the android application based on user needs and user-friendliness.

In creating a native-like application, it is critical to use the proper framework. We’ve compiled a list of the most popular cross-platform mobile development frameworks.

The evolving changes in technologies applied in the android development environment make developers adapt regularly. Developers must change like a chameleon to fulfil the needs of the clients and retain themselves in the market in this competitive world. Apart from developing the applications, the developer must be aware of the guidelines of the Google Play Store while developing an android app. Android is available on different devices with varying screen sizes and viscosity. As a development, responsive user interfaces that adjust to these various screens are essential for Android apps. Since the early days of the Android platform, system APIs have provided very powerful conceptions for developing adaptive UIs, also known as adaptive layouts.

Portable Mobile Application databases are collections of data structures designed to meet development needs. That is why every android app developer must be well-versed in the latest database technologies, as they provide numerous advantages.

If your app works with a considerable quantity of data, the majority of it will most likely not reside on your device at any given time. Instead, your app will most likely interact with a database not located on your phone. Cloud services such as Firebase or Parse offer simple APIs for storing data in the cloud and creating it available across devices. These platforms also frequently offer Java libraries that you can plug into your app, making it simple to cache some of the data on the user’s device. This data synchronization between local storage and the remote database is critical if you want to allow users to use the app while offline.

Secured Databases provide comprehensive security for Android applications against cyber threats. There are various user logins available in DBMS that the admin or owner must approve.

Replication is the method of continually copying data from one database to other databases on different servers. For example, you could use replication to have one database model for writing data and another for assignment data. If your site needs real-time credentials to update and synchronize data, this can enhance response duration and database capability.

When writing to a database, changes to the data must not violate the database’s rules. Consistency guarantees that transactions do not generate errors that can cause the entire database to be invalidated. An entirely consistent system allows you to request a record directly after successfully writing it to a database. It’s essential in financial transactions; consistency, however, comes at the expense of speed and availability. As a result, many NoSQL databases employ an eventually consistent model, allowing faster reading and writing.

Android Testing must complete numerous other tasks to ensure the application’s success. Aside from development, android app testing is another critical aspect to consider. To ensure that an application is entirely error-free, Testing must thoroughly test it. Professionals must understand the fundamentals of Testing and thus scan it and eliminate all bugs and errors.

As a result, testing teams now employ cutting-edge tools and methods to ensure a bug-free app. To accomplish this, developers must first create a beta version of the app and distribute it to the testing team. The team runs the test cases and performs all testing methods to collect results and pass them on to the development team. Once the results are in, the developers can make any necessary changes.

The Android Software Development Kit (SDK) includes the API libraries and developer tools needed to build, test, and debug Android apps. It is one of the considerable widely used Android SDKs.

The Native Development Kit (NDK) is a set of tools that authorizes Android developers to use native-code languages such as C and C++ to execute domains of their apps. The NDK can assist developers by promoting them to reuse existing code libraries in these languages. The essential reference here is that NDK will not benefit most apps.

The Titanium SDK certifies community developers to create high-quality native, mobile, web, or rich hybrid applications for all platforms using a single JavaScript code base. Titanium’s over 5000+ APIs allow you to deliver immersive user knowledge in a fraction of the time traditional natives require.

Hopefully, you now know which skills you need to improve. So, what are you holding out for yourself? Enroll in our complete Android development course in Our N School Academy to learn the fundamental concepts and skills required to become a professional Android developer. Like any other app you build, good performance is only possible if you’ve been sufficiently trained. Before you begin developing any mobile application, please take the time to review our Android app development course in Coimbatore, India. Our experienced tutors can help you iterate on your concept as you create your first Android application.