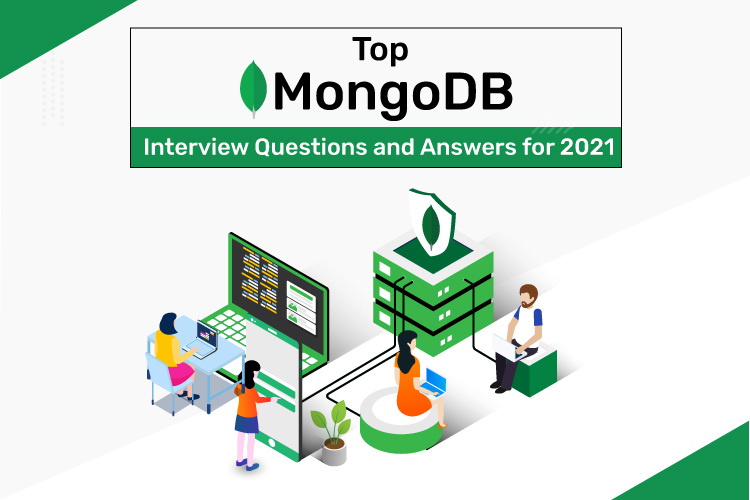 MongoDB is a document database that allows you to store data in JSON documents. This MongoDB Interview Questions and Answers blog is dedicated to giving you a better understanding of the types of interview questions you might face. Recruiters typically begin by asking basic questions and gradually increase the complexity level of the questions as the interview progresses. As a result, our MongoDB Interview Questions blog has been created to meet the needs of the industry. Prepare for your MongoDB interview by reviewing the following questions and answers:

MongoDB is a document database that combines scalability and flexibility with the querying and indexing capabilities that you want. The document model in MongoDB is simple to learn and use for developers, while still delivering all of the capabilities needed to handle the most complicated requirements at any scale.

A replica set is a collection of mongo instances that all store identical data. One node in a replica set is primary, while the other is secondary. All data is replicated from the primary to the secondary nodes.

3. Tell us about Namespace in MongoDB?

In the collection, MongoDB stores BSON (Binary Interchange and Structure Object Notation) objects. A namespace is the combination of the collection name and the database name.

Sharding refers to the process of storing data records across many devices. It’s a MongoDB strategy for dealing with data growth. In a database or search engine, it is the horizontal segmentation of data. A shard, often known as a database shard, is a partition.

5. What is the function of the profiler in MongoDB?

The MongoDB database profiler displays the performance characteristics of each database operation. Using the profiler, you can identify queries that are slower than they should be.

6. What are the different development languages that MongoDB supports?

Any of the languages listed above can use MongoDB. There are a few other community-supported drivers as well, but the ones listed above are given by MongoDB.

NoSQL is a database that can handle and sort a wide range of unstructured, messy, and complex data. It’s merely a different method of looking at the database.

Yes, sure. MongoDB is a NoSQL (non-relational) database.

8. What are the various NoSQL database types? Give an example.

There are four basic types of NoSQL databases:

There are a lot of NoSQL databases out there. NoSQL databases include MongoDB, Cassandra, CouchDB, Hypertable, Redis, Riak, Neo4j, HBase, Couchbase, MemcacheDB, Voldemort, RavenDB, and others.

9. Is MongoDB a better SQL database than others? If so, how do you go about doing it?

Because it allows for a highly flexible and scalable document structure, MongoDB is superior to traditional SQL databases.

In MongoDB, one data document can contain five columns and another in the same collection can have ten. Due to efficient indexing and storing algorithms, MongoDB databases are faster than SQL databases.

10. What’s the difference between MongoDB and MySQL, and how do you tell the two apart?

Although MongoDB and MySQL are both free and open-source databases, they differ significantly in terms of data representation, relationship, transaction, data querying, schema design and specification, performance speed, normalization, and other factors. Comparing MySQL vs MongoDB is comparable to comparing relational and non-relational databases.

11. How can you achieve primary key – foreign key relationships in MongoDB?

By embedding one document inside another, we can construct a primary key-foreign key relationship. An address document, for example, can be inserted into a customer document.

12. Is a lot of RAM required for MongoDB?

No, it’s not true. MongoDB does not require a lot of RAM to run. Because it dynamically allocates and de-allocates RAM according to the requirements of the processes, it can run on a tiny amount of RAM.

The BSON type ObjectID is 12-bytes long. These are the following:

The database name and the collection name are combined to form the namespace. MongoDB holds BSON objects in this collection.

15. Is an object attribute erased from the database if you remove it?

Yes, it is correct. Re-save() the object after removing the attribute.

16. Is there a schema in the MongoDB databases?

Yes, indeed. Dynamic schema is a feature of MongoDB databases. To construct collections, there is no need to define the structure.

17. How does MongoDB handle transactions and locking?

MongoDB does not employ traditional locking with reduction because it is designed to be light, fast, and understandable. It can be thought of as a counterpart to MySQL’s MyISAM auto entrust sculpt. Performance is improved with the simplest business sustain, especially in a system with multiple servers.

18. In MongoDB, what command is used to insert a document?

In MongoDB, the following command is used to insert a document:

19. To check for a connection, what command should you use?

To observe the connection, run the following command:

20. When making an index, what approach will you use?

To make an index, use the createIndex() method.

To display the results properly, we use the pretty() method.

Projection is used to pick only the data that is required. It does not select all of a document’s information.

For sorting documents in MongoDB, use the following syntax:

Administrators can use auditing to make sure that the security controls in place are in control of the system’s behavior.

25. What does the dot notation mean in MongoDB?

To access the items of an array and the fields of an embedded document, MongoDB employs the dot notation.

26. Which command is used to establish a database backup?

The mongodump command is used to make a database backup.

27. Tell us about the covered query in MongoDB?

If a query meets both of the above criteria, it is referred to as a covered query.

The fields in the query are part of an index that the query uses.

The fields in the results all belong to the same index.

28. Define the encryption at the application level.

29. In MongoDB, how can you set the cache size for WiredTiger?

You can select the maximum size of the cache that WiredTiger will use for all data in the WiredTiger storage engine. The storage.wiredTiger.engineConfig.cacheSizeGB parameter can be used to do this.

30. What’s the difference between Cassandra and MongoDB?

In the event of a failure, MongoDB is simple to manage, whereas Cassandra delivers high availability with no single point of failure.

31. When it comes to concurrency, how does MongoDB handle it?

32. In MongoDB, what is the purpose of GridFS?

GridFS is a file system that is used to store and retrieve huge items like audio, image, and video files.

33. What are the CRUD operations?

34. What is the work of Journaling in MongoDB?

While journaling is in progress, write operations are preserved in memory. Because journal writes are routine, the on-disk journal files are quite trustworthy. MongoDB creates a journal subfolder inside dbPath.

35. How can cursors be prevented from interfering with writing operations?

To prevent cursors from interfering with writing, the snapshot() method is utilized. This method negotiates the index and ensures that each query only returns one result for each article.

36. What is the best way to get an old file into the moveChunk directory?

When balancing the slices, the old files are converted to backup files and moved to the moveChunk directory once the functions are completed.

37. When and how does data become multi-slice, and to what extent?

A lump or mass of scarps are retained as an album of all substances. There will be more than a few slice data achievement choices only if there is an additional time slot, but when there is more than one lump, data is extended to a lot of slices and can be extended to 64 MB.

38. Why do you think MongoDB is the best?

MongoDB is regarded as the best NoSQL database due to the following characteristics:

39. What is the Map-reduce concept in MongoDB?

40. Which storage engines does MongoDB employ?