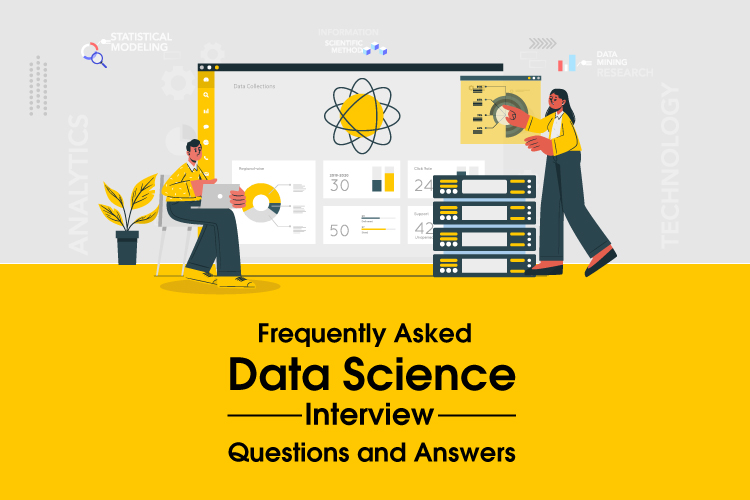 Data Science is one of the most well-known and widely used technologies in the world today. Professionals in this industry are being hired by major corporations. Data Scientists are among the highest-paid IT professionals due to strong demand and limited availability. The most frequently asked questions in Data Science job interviews are covered in this Data Science Interview Preparation blog.

Data Science is a collection of algorithms, tools, and machine learning techniques that aid in the discovery of hidden patterns in raw data.

Bias is an error incorporated into your model as a result of a machine learning algorithm’s oversimplification. It may result in underfitting.

3. In Data Science, what is logistic regression?

The logit model is another name for logistic regression. It’s a technique for predicting a binary outcome using a linear combination of predictor variables.

4. How is the Decision tree algorithm working?

A prominent supervised machine learning algorithm is the decision tree. It’s mostly used for classification and regression. It helps you to break down a large dataset into smaller chunks. Both category and numerical data can be handled by the decision tree.

5. Name three types of sample biases that can occur.

There are three sorts of biases that might occur during the sampling process:

It’s a subcategory of information filtering methods. It aids in predicting the preferences or evaluations that users are likely to bestow on a product.

7. What is the difference between prior probability and likelihood?

The likelihood is the probability of classifying a given observant in the presence of another variable, whereas the prior probability is the fraction of the dependent variable in the data collection.

8. How will you perform Re-sampling?

In the following situations, resampling is performed:

The power analysis is an essential component of any experimental design. It assists you in determining the sample size needed to determine the impact of a given size from a cause with a certain level of confidence. It also lets you use a specific probability within a sample size restriction.

10. How do you use Collaborative Filtering?

Collaborative filtering is a method of searching for the right patterns using different data sources, numerous agents, and cooperating viewpoints.

11. How does Linear Regression work?

12. What is the purpose of conducting A/B Testing?

Random studies with two variables, A and B, were conducted using AB testing. The purpose of this testing approach is to determine what adjustments should be made to a web page to maximize or raise a strategy’s outcome.

13. How will you use Ensemble Learning?

The ensemble is a means of bringing together a varied group of learners to improve the model’s stability and predictive capacity. Ensemble learning approaches can be divided into two categories:

Bagging: The Bagging method allows you to use comparable learners on small sample size. It enables you to make more accurate predictions.

Boosting: Boosting is an iterative strategy for adjusting the weight of observation about the previous classification. Boosting reduces bias error and aids in the development of robust predictive models.

The core of neural net training is back-propagation. It is a way of adjusting a neural net’s weights based on the error rate acquired in the previous time. By enhancing the generality of the model, you may lower error rates and make it more dependable.

15. Tell me what do you know about Artificial Neural Networks(ANN)?

Artificial Neural Networks (ANN) are a type of machine learning technique that has revolutionized the field. It enables you to adjust to changing input. As a result, the network produces the best feasible result without having to change the output criterion.

16. Tell me the importance of Eigenvalue and Eigenvector?

17. Explain the difference between the expected and average values.

Although there are few differences, both names are employed in different contexts. When describing a probability distribution, the term “mean value” is used, whereas “anticipated value” is used when discussing a random variable.

Random forest is a machine learning technique that may be used to accomplish various regression and classification problems. It’s also used to deal with missing data and outliers.

19. Why is the K-means Clustering method important in Data Science?

Unsupervised learning with K-means clustering is a popular technique. K-clusters is a classification approach that uses a specific set of clusters to classify data. It is used to organize data and determine how similar it is.

20. Is there any difference between Data Science and Data Analytics?

Yes, The primary distinction between the two is that data scientists have a higher level of technical expertise than business analysts. Furthermore, they do not require the business knowledge essential for data visualization. Data scientists must slice data to extract important insights that may be applied to real-world business scenarios by data analysts.

22. Why is there a need to update the algorithm in Data Science?

In the following scenario, you must update an algorithm:

23. What is the best language for text analytics? Which is better, R or Python?

Python is better for text analytics since it has a large library called pandas. It can leverage high-level data analysis tools and data structures, whereas R does not.

24. Explain why data cleansing is important and what strategy you employ to keep your data clean.

Dirty data frequently leads to erroneous internal information, which might jeopardize an organization’s prospects. If you want to launch a focused marketing campaign, for example. Our research, on the other hand, inaccurately predicts that a particular product would be in high demand among your target demographic; the campaign will fail.

25. What do you know about the Boltzmann Machine?

Boltzmann machines are a straightforward learning method. It aids in the discovery of features in the training data that indicate complicated regularities. For the given problem, this algorithm allows you to optimize the weights and quantity.

26. Name the most commonly used algorithms by the Data Scientist?

The following are the four most regularly utilized algorithms by data scientists:

27. Is it possible to capture the relationship between categorical and continuous variables?

To capture the relationship between continuous and categorical data, we can utilize the analysis of covariance methodology.

28. How do you choose important variables while working on a data set? Explain

You can use the following variable selection methods:

29. Distinguish between a Validation Set and a Test Set.

A validation set is usually included in the training set because it is utilized for parameter selection, which helps you prevent overfitting the model you’re building.

A Test Set is used to test or evaluate the performance of a machine learning model that has been trained.

30. When does a static model experience underfitting?

When a statistical model or machine learning algorithm fails to capture the underlying trend of data, this is known as underfitting.

31. Explain how to use cluster sampling in Data science.

32. What do you mean by Precision?

The most prevalent error metric is precision, which is employed in the n classification mechanism. It has a range of 0 to 1, with 1 being 100%.

33. What is the difference between skewed and uniform distribution?

34. What are the benefits of Statistics to Data Scientists?

Statistics assist data scientists in gaining a better understanding of client expectations. Data Scientists can learn about consumer interest, behavior, engagement, and retention by using statistical methods. It also aids in the development of sophisticated data models for the validation of specific inferences and predictions.

35. What do you mean by Auto-Encoder?

Learning networks are Auto-Encoders. It enables you to convert inputs into outputs with fewer errors. This indicates that the output will be as close as feasible to the input.

All the best for your Data Science Interview!