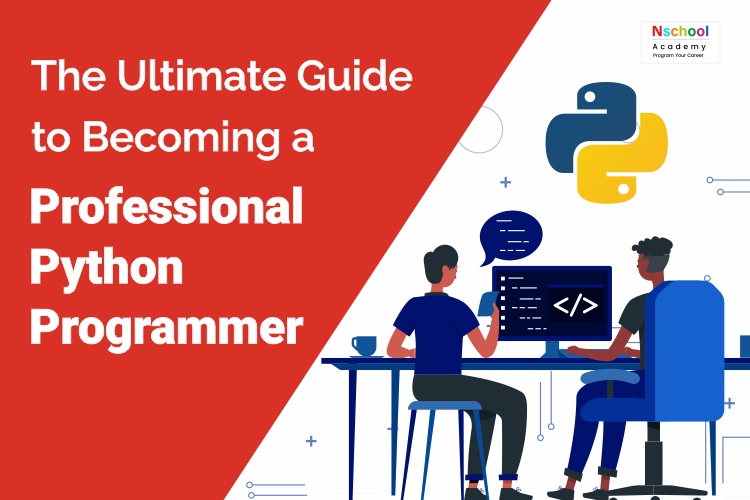 The Ultimate Guide To Becoming A Professional Python Programmer

Python is an object-oriented programming language that creates various desktop and mobile programs, websites, and software interfaces. Python developers connect software components and improve functionality, data privacy, and security using their programming and coding talents. Knowing what Python developers perform and their abilities might help determine whether you want to follow this career. This post will look at how to become a Python developer, their responsibilities, and the skills needed to succeed. You should now understand the relevance of the Python programming language and the Python developers who assist us address many significant problems in our life. Python made its way into these incredible applications because of its simplicity, versatility, and flexibility. Python creates many popular apps, such as Spotify and Netflix.

Python is an object-oriented high-level programming language used to construct various desktop programs, systems, websites, and platforms. The latest version it observes is Python 3.10.5, released on June 28, 2022. It is the first language every beginner wishes to learn before becoming a professional. It is the perfect naturalistic language to learn. Python allows you to integrate your systems. Every novice desires to study it as their first language. This language may be less prevalent in the technological world, but it is unquestionably the best choice for newcomers and beginners. In addition, Python is on its way to the top. Python can reclaim the number one position that Java and C have held for the past 20 years.

Python is famous among programmers because it is:

Who is a Professional Python Developer?

A Professional Python Developer is a software team component skilled in building, designing, and delivering computer applications and other programs in Python. A Professional python developer is also responsible for locating and correcting issues (debugging) in Python-based development projects. Python developers often work on an application’s backend (server-side) development. Regardless, with machine learning and data science beginning, python developers no longer limit their work to developing code and debugging errors. But also work with apps connecting to third-party web services and helping the front-end development team bring their user interface features. A Professional Python developer can do a variety of things. They may develop an app, construct a coding framework, build websites, or launch new services. A python developer’s job may vary based on the demands of an organization. Some Python developers may not work for a specific firm but independently on various projects for numerous companies.

Python is a straightforward yet powerful programming language. Python developers that are versatile work on a variety of projects, including :

​​Python is required for an experienced person to advance in their job. If you are a java scripter, it is time to learn Python for Beginners. To be well-versed in Python, you must have strong knowledge of scientific and numerical modules. Salaries for experienced Python developers are around 12 lakhs per year.

Companies that rely on the use of Python

Python is becoming a more effective programming language, and many IT organizations, start-ups, and multinational corporations are contemplating using it to construct software applications. Let’s have a look at some of the top 10 Python-using companies.

Python is used in AI and data science

The term “AI” has become somewhat of a buzzword in recent years, but the fact is that it all boils down to algorithms, code, and logic. Given Python’s scope and capability, it should be no surprise that some world-class implementations exist for engendering intelligent behavior in Python. The ubiquitous machine learning library ‘Scikit-Learn’ is the most popular. Sklearn, speaking from experience, simplifies the process of generating anything from classifiers to regression models hundreds of times more accessible than it would otherwise be. You’d be hard-pushed to find a better suite of implementations than Python’s, whether you’re conducting simple data analysis or full-fledged data science. If Pandas isn’t fast enough for you, Professional Python Developers can do most basic vector operations with NumPy. Numpy also can perform linear algebra, scientific computing, and a variety of other highly specialized tasks. As a result, it is an excellent tool to learn how to use correctly.

How to Become a Professional Python Developer?

Python was the considerably popular programming language in 2022, and it looks that this trend will continue. The ease of access and expanding demand are strong reasons to become a Python developer. There are numerous job openings, and having in-demand skills will help you stand out. Python’s programming language has several features that entice programmers to use it instead of other languages. Python’s straightforward syntax and readability make it considerably easier to learn. Because it is so easy, developers will only have to spend a little time developing complex apps.

After the initial learning session, you will understand Python well. It is now time to broaden your knowledge and experiment with new technology. As a Python developer, the essential abilities and technologies to acquire include AWS, front-end platforms, web frameworks, machine learning, and artificial intelligence. Python developers may obtain this knowledge through Python Course Providing institutes. A framework is toolbox developers use to swiftly and efficiently design a software product. Developers may use frameworks to focus on creating application business logic rather than reinventing numerous essential services such as data storage, security layers, application routing, and many more. Full-stack platforms and micro frameworks are the two basic types of frameworks.

It is not feasible to make code lines equal since the code must be learned and implemented. It must go via skilled developers who can establish the proper codes and update them based on the authorization. Learn Coding Guidelines comprises a lot of developer assistance due to a need for more spectacular and compact code. Learn Coding Guidelines is an excellent answer since it gives developers explicit knowledge. To gain master-level authorization experience, one must grasp the codes that can give successful roles. It teaches new programmers how to follow standard coding principles. While learning the codes, they must be legible and adaptive to the programming environment.

Libraries are collections of code a developer may use to create an application. It reduces the need to work hard on the fundamental code structures that Python Developers must develop from scratch. Python is thought to have the most incredible library collection, with 137,000+ python libraries such as Numpy, SciPy, SQLAlchemy, and others, and over 267k projects. You must become familiar with the various codes available, study them well, and begin utilizing them. Furthermore, given this massive number of projects in the library, you may estimate the number of people in the Python community. So, interact with them and make this an enriching experience.

A python developer frequently works on server-side (backend) programming. However, as part of the development team, many python developers also aid front-end developers. A Python developer should understand the foundations of front-end technologies such as HTML, CSS, and JavaScript to be effective in his profession. Fundamental knowledge will help you better comprehend the program’s user interface and visual aesthetics, allowing you to provide more trustworthy insights.

Every day, a developer interacts with a massive amount of data, ranging from different codes to changed versions. As a result, knowing how to use version control tools like Git, BeanStalk, and others can help you stay organized and efficient. Although Python has its test automation tools, a python developer should be well acquainted with this notion for a better understanding. Test automation improves your job, and while a Python developer is responsible for diagnosing mistakes, technologies such as Selenium, TestComplete, and others will enhance efficiency and speed.

You will be responsible for writing and testing scalable code, creating backend components, and integrating user-facing parts in conjunction with front-end engineers in this job. To be a good Python developer, you must have an extensive understanding of object-relational mapping, familiarity with server-side logic, and above-average Python programming skills. Finally, a top-tier Python developer can create highly responsive web apps that precisely meet customer demands.

include collaborating with development teams to define application needs.

Python is also the most popular programming language in the industry, with over 76 percent of businesses preferring it over other programming languages. As a result of the preceding procedures, you can become a top-tier Python developer. Nschool Academy Provides a Python Training Course with Real-Time projects to get your dream job and the It Sector. You may improve your abilities by adopting Python Training from a reputable academy.