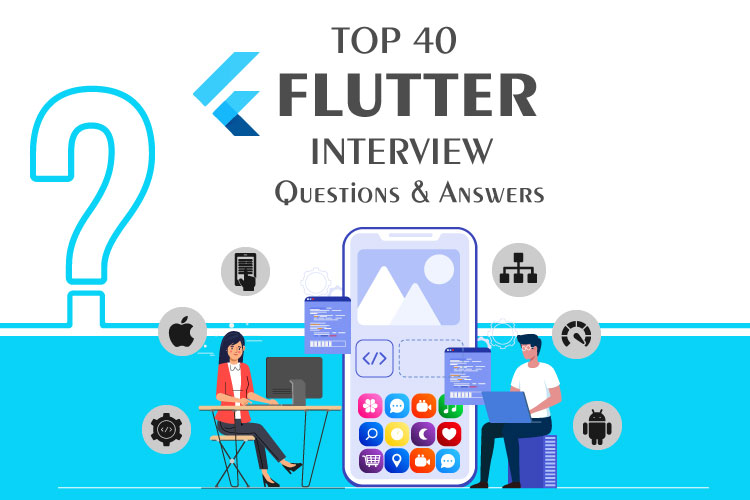 Flutter is primarily designed for 2D mobile apps that run on both Android and iOS. It can also be used to generate full-featured apps with the camera, storage, geolocation, network, third-party SDKs, and other features.

2. Explain to me about Dart?

Dart is a C-style object-oriented programming language with a general-purpose syntax. It was created by Google in 2011 and is open-source. Dart programming is used to build frontend user interfaces for web and mobile applications. It’s a fundamental language for developing Flutter apps. Dart can be compiled both in AOT (Ahead-of-Time) and JIT (Just-in-Time) (Just-in-Time).

3. Tell us more about Flutter widgets?

A Flutter app is often thought of as a collection of widgets. Every time you code in Flutter to construct something, you’ll do so within a widget. Widgets explain how the current configuration and state of your app should appear. When you made a change to the code, the widget reconstructed its description by calculating the difference between the previous and current widgets to determine the smallest changes for app UI rendering.

To build the app, widgets are nested within each other. It means your app’s root is a widget, and anything below it is a widget.

4. Tell us about stateful widgets?

State information is stored in a Stateful widget. It’s called dynamic because the inner data will change during the widget’s lifetime. A Stateful widget is a widget that helps us to refresh the screen. There is no build() technique for this widget. It has a createState() method that returns a Flutter State Class. Checkbox, Radio, Slider, InkWell, Form, and TextField are examples of Stateful widgets.

5. What are stateless widgets?

Flutter has grown in popularity and acceptance as the most widely used and accepted tool for developing apps. The following are some of the most popular Flutter apps.

The project’s configuration file will be used frequently when dealing with the Flutter project. It gives you control over how your app works. It also allows us to set the app’s constraints. This file contains the following information:

The App State is also known as a shared state or an application state. The app state can be shared across different sections of your app, and user sessions are maintained in the same way.

The following are some App State examples:

11. How to create HTTP requests in Flutter?

Use the HTTP package to create HTTP requests. (import ‘package:http/http.dart’ as http;). This has an appropriate method for making a request:

This will return a Future<http.Response>.

12. Explain Flutter packages and their plugins?

A package is a collection of classes, interfaces, and sub-packages that are all of the same types. Packages and plugins allow us to create the app without having to write all of the code ourselves. It is possible to import new widgets or functionality into a Flutter app. There isn’t much of a difference between packages and plugins.

Plugins allow more usability on the device by using native code, while packages are new components or code written in dart languages. Packages and plugins are both related as packages in the DartPub.

13. Why is Flutter UI focused?

Flutter is said to be UI-focused since it has an excellent user interface because it uses a design-centric widget, advanced APIs, high-development tools, and many more features.

15. What is the point of making separate directories for iOS and Android in a flutter project?

ANDROID: This folder is for storing a complete Android project. When creating a Flutter framework for the Android platform, this will come in handy. When you compile Flutter code into native code, it is imported into an Android project, resulting in a native Android app.

iOS: This folder is for storing a complete Mac project. When creating a Flutter program for the iOS platform, this will come in handy. It functions in the same way as the Android folder. When you compile Flutter code into native code, it is imported into the Android iOS project, resulting in a native Android app. Working with the Xcode IDE and macOS is the only way to build a Flutter program.

15. Tell us about Hot Reload in flutter?

The hot reload function helps you to experiment with the project quickly and easily. It aids in the creation of user interfaces, the addition of new features, the correction of bugs, and the rapid development of apps. Follow these steps to perform a hot reload of a Flutter app:

17. What are the well-known database packages used in flutter?

The following are the most commonly accepted and widely used database packages in Flutter:

Firebase: A user can access and modify the cloud database using the Firebase database.

Sqflite: A user can access and modify the SQLite database using the sqflite database.

18. How will you utilize This keyword in Dart?

In Dart, this keyword refers to the present instance of the category .

19. What are the advantages of a Flutter Inspector?

20. How to define a generic extension in Dart?

This could be done by adding a template parameter, like the below,

Factory constructors are developed by using the factory keyword. They can return subtypes or even null.

23. List the different types of grid view available in Flutter?

The different forms of grid views available in Flutter are as follows:

This stream is for single messages that can be processed one at a time. In a browser, these types of streams are widely used for mouse events. This sort of stream can be added to the list at any time. Multiple listeners can listen at the same time, and you can listen even though your previous subscription has been canceled.

25. Tell us about Single subscription streams available in Flutter?

It is a common and widely used stream. It is made up of a set of events that make up a larger whole. All events must be delivered in a specific order, with no single event being missed. When you get a web request or a file, you get this sort of stream. There is only one way to list this stream. Listing it over and over results in missed initial values, and the final stream makes little sense. The data is fetched and given in chunks when the listing begins in this stream.

26. Create a TextField with an initial value?

We can set a controller with an initial value like TextEditingController(text: “Initial Text”).

27. Tell me about Build context?

In Flutter, the BuildContext is a component of the widgets in the Element tree, with each widget having its BuildContext. It’s primarily used to get a connection to another widget or theme. If we want to use a material design feature, we must relate it to the scaffold, for example. Scaffold.of(context) method may be used to obtain it.

28. How will you declare async function as a variable in Dart?

Async functions are normal functions having variable type just specifies that it returns a Future:

29. How will you use release mode in Flutter?

Release mode helps us to customize the codes and produce them in a completely configured state without any debug data. Many sections of the application’s code will be omitted or rewritten in this mode.

When we’re ready to release the software, we switch to this mode. It allows for optimal optimization and a limited device footprint.

To compile the release mode, run the following command:

30. When would you use profile mode in Flutter development?

Our applications’ output is measured using profile mode. In this mode, you can still debug and profile the output of your app. Since the emulator and simulator are not indicative of real-world output, this mode is disabled.

To compile the profile mode, use the following command:

In Flutter, a ticker represents the rate at which our animation is refreshed. It’s a signal-sending class that sends a signal at a set frequency, such as 60 times per second. Our watch, which tics at regular intervals, helps us grasp it. Ticker offers a callback method for each tick that has the length since the first ticks at each second since it was started. Even if the tickers began at different times, they are immediately synchronized.

A stream is a set of asynchronous events that happen at the same time. It generates an asynchronous data series. It’s like putting any value on one end of a pipe, and if there’s a listener on the other end, it will receive that value. We can keep several listeners in a stream, and when they’re all placed into the pipeline, they’ll all get the same benefit.

The Stream API’s await for and listen() methods can be used to process a stream. It has a mechanism for dealing with errors. Streams can be created in a variety of ways, but they can all be used in the same way. Consider the following condition:

await for (var value in stream) {

The runApp() function is vital for returning the widgets that are connected to the screen and will be made on the screen as a root of the widget tree.

The “?” operator calculates and returns the difference in value between two expressions based on the given condition. It can be used in the following ways:

It primarily functions with the importance of States. Since it removes the retained State values and sets them to their defaults, it allows developers to get a completely compiled program. Our app widget tree is rebuilt with the freshly typed code on every Hot Restart.

37. How to create Extensions?

Extension methods add new functionalities to any type, even those from the basic level. They are introduced earlier in Dart 2.7 and are already available to use in Flutter as well. Check the below code to create extensions,

Dart has some helpful tips for dealing with null values.

1. The “??=” assignment operator, which only assigns a value to a variable if it is null.

39. What is the use of the Await function?

Await is only used within async. It puts all currently running functions on hold until pf nature is done.

40. How can you run code in debug mode only?

To run the code in debug mode only, we must first import the dart foundation as shown below:

Next, use the kReleaseMode as shown below:

if (Foundation.kReleaseMode){ // is Release Mode ??

Now, you came across the above are the top-ranging flutter interview questions 2021.

FINAL WORDS BEFORE YOUR INTERVIEW:

Every company nowadays has an app to advertise their services and increase sales. This has resulted in a strong demand for Flutter and Dart, as well as a rise in the number of opportunities in this area. I hope you found this Flutter interview questions blog to be informative. Also, Our NSCHOOL Academy Technical experts are well supportive enough to guide you throughout the flutter development training course journey. Good luck with your studies and interview for the flutter developer!